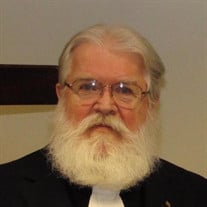 Reverend William John Burke Jr., age 80, passed away peacefully at home in Cortlandt, NY on Sunday, April 26, 2020. A proud native New Yorker, Bill was born in New York, New York on August 14, 1939, the son of Madalene LaGraff and William Burke. In 1964, he graduated from Western Theological Seminary and became an ordained minister with the Reformed Church in America. After completing an intensive Chinese language program at Yale, he departed for Taiwan as a missionary in student work, teaching Western literature, Greek and Roman Literature, and Drama in universities throughout the country with the Taiwan Presbyterian Church. He also served as the chaplain at Tunghai University in Taichung. He received a Master’s degree from St. John’s University in 1973 in Chinese Language and Literature. Bill married Diana Hsiu-Hsia Lai in June 1975, in Astoria, NY. The couple have two daughters, Cáitlín and Christīna, and just celebrated their 45th wedding anniversary this past year. Bill served as a pastor for Passaic Reformed Church and Minisink Reformed Church in New Jersey, a Taiwanese and Chinese congregation at Christ Community Church in Farmington Hills, Michigan, and All Nations Campus Ministry in Ann Arbor. In his retirement, he served the Taiwanese Fellowship Presbyterian Church in Royal Oak and the Taiwanese student ministry at the Ann Arbor Taiwanese Presbyterian Church. In addition to his pastoral duties, he also taught Chinese language to missionaries and English language to Chinese-speaking individuals seeking citizenship. In 2017, Bill returned to his beloved home state of New York and became a part of the community at the Reformed Church of the Tarrytowns. Bill dedicated his life to the church and university student ministries. Beyond this, some of his favorite activities were meeting new and old friends, having a good Irish tea, reading, watching British mysteries, enjoying ice cream, petting dogs, horseback riding, gardening, attending his daughters’ shows and conferences, and storytelling. As a lifelong lover of the arts, he treasured taking his family to the opera, theater, and museums. He was an unforgettable character and loved talking and spending time with people. Everyone who met Bill was touched by his extraordinary kindness, sense of humor, and unique personality. He was a gentleman to the core. Bill was the most devoted husband and father. His love for his family was infinite and unconditional. He is remembered by his family as a loving husband, patient father, good listener, and vigorous supporter of the endeavors of his wife and daughters. His faith in God was unending, and every day in the Burke household was full of prayers, encouragement in the understanding of the providence of God, and reminders of God’s faithfulness. Bill is survived by his wife Diana, daughters Cáitlín (Daniel O’Brien) of New York, NY, and Christīna (Randall Mathison) of Columbus, Ohio; his sister Sarah (Duane) Jonker-Burke of Astoria, New York; Samuel (Brandy, great-nephew Isaac) Jonker-Burke; and the Lai family in Taiwan. He was preceded in death by his parents, Madalene and William Burke. In lieu of flowers, the family has created the “Reverend William J. Burke Jr. Memorial Taiwanese Student Ministry Fund” for the group he worked with at the Ann Arbor Taiwanese Presbyterian Church. A memorial service to remember and celebrate Bill’s life will be announced at a later date after COVID-19 restrictions are lifted. You can visit the memorial website at: https://burkecaitlin.wixsite.com/williamburkememorial

The family of Reverend William J. Burke Jr. created this Life Tributes page to make it easy to share your memories.

Send flowers to the Burke family.