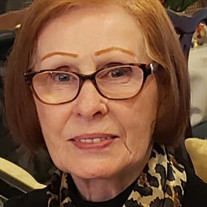 Veronica Cocchiaraley, resident of Hartsdale, formerly of Tarrytown, died on December 20, 2020. The cause of death was respiratory failure related to cancer. She was 78. Veronica was born on April 6, 1942 in Bradford, West Yorkshire, England in the United Kingdom, to the late Dominick and Anna (Coyne) Salmon. After becoming a naturalized United States citizen in 1981, she worked primarily as an Administrative Assistant, eventually becoming an Office Manager. She entered semi-retirement in 2011 and worked most recently as a part-time caretaker in a nursing home. Veronica had a strong commitment to volunteerism and community service. She taught English as a Second Language to adult learners with Literacy Volunteers of America. She was also formerly associated with the Junior League of Westchester-on-Hudson. In addition, Veronica was a former member of the Scarsdale Women’s Club, serving as Philanthropic Co-Chair and Membership Co-Chair. Later she returned to teaching English, this time to adult learners at the Hitchcock Presbyterian Church in Scarsdale, New York. Perhaps most prominently, she was also a former member of the American Red Cross, Westchester County Chapter, with which she provided assistance to victims of Hurricane Katrina in New Orleans, Louisiana in 2005. Veronica is survived by her devoted son, Christopher, to whom she was a proud and loving mother as well as a life mentor. In addition, she is survived by a sister, Patricia, and a brother, Brian, both in England, as well as a sister, Kathleen, in Australia and a sister, Christine, in New Zealand. She was predeceased by her cherished husband of 22 years, Alfred. Veronica was known for her optimistic outlook, her compassion for others and her penchant for having fun. She loved traveling and making new friends. She will be fondly remembered and dearly missed by all. Donations in lieu of flowers may be made to the American Cancer Society. https://donate3.cancer.org/ Visiting hours will be Sunday 2-6 pm at Dwyer & Michael’s Funeral Home, 90 North Broadway, Tarrytown, NY. A Mass is scheduled for Monday, 10:00 am at Immaculate Conception Church, Irvington, NY 10595. Internment to follow at Gate of Heaven Cemetery.

Veronica Cocchiaraley, resident of Hartsdale, formerly of Tarrytown, died on December 20, 2020. The cause of death was respiratory failure related to cancer. She was 78. Veronica was born on April 6, 1942 in Bradford, West Yorkshire, England... View Obituary & Service Information

The family of Veronica M. Cocchiaraley created this Life Tributes page to make it easy to share your memories.

Send flowers to the Cocchiaraley family.