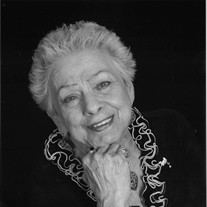 Serafina Randazzo of Tarrytown, NY, passed away on February 17, 2015 comfortably in her own home.  Fina was born and raised in the Bronx and moved to Tarrytown, NY in 1962.  She was the daughter of the late Antoinette and Calogero Corpora.  She had 2 brothers, Anthony and Joseph Corpora and one sister Ana Marie Corpora.  Fina is survived by her children: Marian, Joseph and daughter- in-law Annie, Joni and son-in-law David, David and daughter- in-law Lillian.  She was Grandmother of Joseph Jr., James, John, Andrew and Liana.  She is survived by many nieces/nephews, great nieces/nephews, and great-great nieces/nephews whom she adored.  She so looked forward to the “Corpora Cousins” dinners/reunions. She was a member of Transfiguration Church and was on their Parish Council and PTA.  Fina had been a member of various committees including: Girl Scout Leader, Sleepy Hollow PTA, Neighborhood House Board, and a Phelps Memorial Hospital volunteer.  She was also one of the original founding members of the Columbiettes of St. Elmo Council of Tarrytown.  The 1970 Bi-Centennial of Tarrytown held great memories and joy as she and her family participated in many of the follies.  In 1976 Fina was appointed Director of the Senior Citizen Nutrition Program at the Knights of Columbus.  This was the first 5 day per week program which fed as many as 70 people per day.  Fina’s first job in Tarrytown was for Sleepy Hollow High School BOCES.  She then became a Real Estate Agent and worked for Nagel and Beck and Wheatley Realtors.  Fina then got bitten by the travel bug and became a Travel Agent working for Tarry Travel, Miles Unlimited and finally ATC. She often said that one of the best times of her life was traveling the world on Pan Am! Fina was a member of the Neighborhood House, Transfiguration Seniors, and Tarrytown Seniors which she was the Social Director for both.  For many years Fina planned the Tarrytown Senior’s Spring Fling and their Holiday Party at Tappan Hill.  Later in life Fina took up painting at the Neighborhood House and was an amateur yet impressive landscape artist.  Her paintings along with all of her classmates were displayed at the Warner Library each year.   Fina has always embraced different cultures and was touched and honored to be chosen as an aide in the 2012 Tarrytown St. Patrick’s Day Parade.  Fina’s love for the Tarrytowns, her family, and the lifelong friendships she made will live in her heart forever.  In lieu of flowers, memorial donations in Serafina Randazzo's name may be made to The Tarrytown Neighborhood House and St. Jude's Children Hospital.

Serafina Randazzo of Tarrytown, NY, passed away on February 17, 2015 comfortably in her own home.  Fina was born and raised in the Bronx and moved to Tarrytown, NY in 1962.  She was the daughter of the late Antoinette and Calogero Corpora.... View Obituary & Service Information

The family of Serafina Randazzo created this Life Tributes page to make it easy to share your memories.

Serafina Randazzo of Tarrytown, NY, passed away on February 17,...

Send flowers to the Randazzo family.