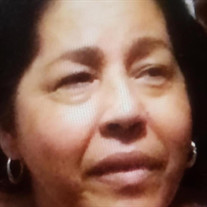 Rosa Nivia Matos was called to the Kingdom of the Lord on Saturday, The twentieth of June, 2020. She passed peacefully in her home, surrounded by her family. Rosa was born on July 23, 1953 in Villaba, Puerto Rico to the late Marcelino Matos Rivera and Ramona Gonzalez Matos. At the age of 13, Rosa came to the United States and became a lifelong resident of Sleepy Hollow, NY. In her youth, Rosa was well known for being an outstandingly talented Softball player. She had played for the COC Softball team in which she played various positions. She loved music very much and was one of the best salsa dancers around. A great talent of hers was cooking! She fed everyone who stepped a foot though her door, creating specialty dishes and spreading her love through each plate. At the age of 19, Rosa met her first and only love, Jorge Astudillo. They married and had 4 beautiful children. Rosa was very overprotective of her children, especially her daughters. Her first time becoming a grandmother was amazing to her- her care, commitment and love for Joel was noted by her huge smile. As she gained more grandchildren, she was becoming filled with even more joy in her heart. Rosa was employed by the Rocafellers for several years as a housekeeper. She was a strong minded, outgoing, expressive, yet humble person, dedicating herself to helping others to the best of her ability. Rosa was also a caregiver for her parents when they fell ill, taking on the responsibility head on with no hesitation. Family meant everything to her. Her loyalty was beyond comparison. Rosa was well loved and appreciated by her neighborhood- always ready to help others when needed. She had many close friends, particularly her childhood best friend Tommy Scott. Their bond was so tight it could never be broken. Words can not describe the nurturing, loving and caring heart of gold Rosa possessed. She will always be remembered for her pure heart, strength and contagious smile. Rosa is survived by husband Jorge Astudillo, brothers Jose-Angel Matos, Tojo Matos, Raul Matos, Mando Matos, sister, Elizabeth Matos, children, Nivia Astudillo, Roger Astudillo, Marlene Astudillo and Eugenia Astudillo, 9 grandchildren; Jonathon, Noel, Angel, Annayah, Emily, Jadiel, Angel (Tito), Juliette, and Jayce, 1 great-grandchild; Bella, and a host of nieces, nephews, family and friends. She is reunited with her late father, Marcelino Matos Rivera, mother, Ramona Gonzalez Matos, sister, Yvette Myrta Torres, brother, Hector Matos, and late grandson Joel Gomez. We love you Mama.. Gone but never forgotten.

Rosa Nivia Matos was called to the Kingdom of the Lord on Saturday, The twentieth of June, 2020. She passed peacefully in her home, surrounded by her family. Rosa was born on July 23, 1953 in Villaba, Puerto Rico to the late Marcelino Matos... View Obituary & Service Information

The family of Rosa N. Matos created this Life Tributes page to make it easy to share your memories.

Rosa Nivia Matos was called to the Kingdom of the Lord on Saturday,...

Send flowers to the Matos family.