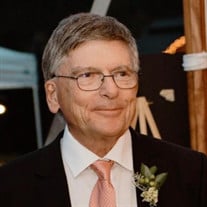 Robert Michael Bowe, of Pocantico Hills, New York, 73, known to many as Mike, passed away peacefully on March 7, 2020 surrounded by his family. Mike was born to John and Eileen Bowe on August 14, 1946 in Rhinebeck, New York. He graduated from Red Hook High School in 1964 with accolades such as varsity captain and school president. He held a lifelong career in finance and investment banking. Mike was also a beloved member of the recovery community and dedicated his life to helping alcoholics recover from alcoholism since 1976. Mike is survived by his wife of 39 years, June Bowe, and his six daughters and their spouses: Jennifer Bowe, Emily Blank and spouse Matthew Blank, Katelyn Roberta and spouse Chris Roberta, Jillian Bowe, Amanda Madaras and spouse David Madaras, and Kristen Bowe. He is also survived by three grandchildren, his brother Anthony Bowe, and sister Deborah Bowe. Mike was predeceased by his father John Bowe, mother Eileen Bowe, brother John “Jack” Bowe, and sister Gayle Frank. Mike was known for his wit and sense of humor. When not golfing, his free time included going to the gym, a men’s meeting, reading the New York Times (on the sidelines of a soccer game back in the day), completing the crossword puzzle, and napping to the Golf channel. He always had multiple games of Scrabble/Words with Friends going on his iPad and loved desserts, especially Milky Ways. Mike “Pop Pop” had three grandchildren he greatly adored and loved teaching them all his "innocent" trickery. When not eating his staple of peanut butter on toast, he grilled a mean cheeseburger. He was devoted to his family, who he put before anything else. Above all, he was a great and patient listener, not only for his family but for many he supported in and around his community. His words of wisdom and the sound of his laughter will live on in all who knew him. The memorial service will be held on Thursday, March 12, 2020 from 12 p.m to 3 p.m and 5 p.m to 9 p.m at Dwyer & Michael's Funeral Home in Tarrytown, N.Y. Additionally, there is a church service at the Union Church of Pocantico Hills on Friday March 13, 2020 at 1 p.m with a reception to follow. All who knew and loved Mike are welcome. The family asks that donations, in lieu of flowers, are made to the Union Church of Pocantico Hills or the recovery charity or your choice.

Robert Michael Bowe, of Pocantico Hills, New York, 73, known to many as Mike, passed away peacefully on March 7, 2020 surrounded by his family. Mike was born to John and Eileen Bowe on August 14, 1946 in Rhinebeck, New York. He graduated from... View Obituary & Service Information

The family of Robert Michael Bowe created this Life Tributes page to make it easy to share your memories.

Send flowers to the Bowe family.