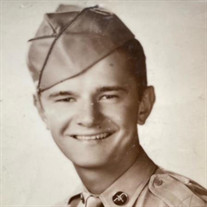 Raymond G. Bochnik of Elmsford, NY, entered eternal rest on December 6, 2021, at his home. He was born in Yonkers on January 31,1929, to Mary (Skowronski) Bochnik and Joseph Bochnik. He proudly served in the U.S. Army Air Corps from 1948 to 1952. Ray was heartbroken when the love of his life, his wife Carolyn Otis Bochnik, predeceased him on June 3,1992, and he deeply mourned her loss, always keeping her pictures nearby and pointing out her beauty to anyone who visited. He was predeceased by his brothers Alexander, Joseph, Edward, George and Charles and sisters Irene Bena, Jenny Hibbard, and Sister Victoria Mary, C.R. All family members were long-time parishioners of St. Casimir's Church in Yonkers. Ray was very athletic and excelled at bowling, golf and softball. He was a fast-pitch softball pitcher for many years, even into his 70s. He was a great storyteller, (and he had a million of them, mostly humorous) especially about growing up, his days as a caddy at Knollwood Country Club, the celebrities he met there, his golfing days, his beloved Irish setters Penny and Brutus, and the 31 years he spent at the New York School for the Deaf, working with Carol as "Cottage Parents" for the children that resided there during the week. He was proficient at American Sign Language and never forgot how to "sign". He was famous for his rendition of the song "Please Release Me" at weddings singing while signing the words, and he often recruited his nieces to try to follow his lead and sign along behind him as back-up. Ray will be missed by his many nieces, nephews, and grand-nieces and nephews, most of whom had received funny or odd nicknames from him, Bubbles, Snerd, Stringbean and even Cement Head. He thoroughly enjoyed many lunch outings with his nephews and nephew-in-laws, particularly at LaManda's or the Cabin. He always had a good time with his "boys" and they will miss his humor and endless stories about the good old days. For the last few years, it took a "village" to help honor Ray's wish to remain at home for his end of life, including a local pharmacist, barber, dentist and podiatrist. But special thanks go to his nieces, nephews and grand- niece, hospice, and the compassionate aides who were so kind and patient during his last months, especially Marva and Atiya as well as many other wonderful ladies. We could not have done it without you all, and we are very grateful. We ask that you take a moment to offer a prayer for Ray. If you would like to make a donation in his name, please remember the NY School for the Deaf Foundation, 555 Knollwood Road, White Plains, NY 10603, since his memories from those years always remained close to his heart.

Raymond G. Bochnik of Elmsford, NY, entered eternal rest on December 6, 2021, at his home. He was born in Yonkers on January 31,1929, to Mary (Skowronski) Bochnik and Joseph Bochnik. He proudly served in the U.S. Army Air Corps from 1948 to... View Obituary & Service Information

The family of Raymond Bochnik created this Life Tributes page to make it easy to share your memories.

Send flowers to the Bochnik family.