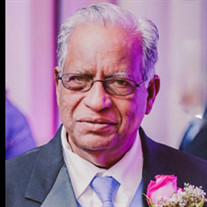 The eldest of eight children, Pappy Kunjukunju was born on August 26,1939 to Varghese and Thankamma Chacko of Vengavilayil House Mathra, in Punalur Kerala, India. He was raised in a Pentecostal Christian home and revered God from an early age. In everything he did, Pappy looked to the Lord and sought to lead a life honoring Jesus Christ. He worked very hard and with great humility, devoting his life to God and his family, pursuing education, and enjoying spicy food. Despite incredibly impoverished beginnings, Pappy became the valedictorian of his high school class. Shortly thereafter, he started college in hopes of becoming a scientist. But, out of deep love and respect for his family, he put his dreams on hold to provide for his parents and siblings. Eventually, Pappy resumed his studies while working full time, pursuing a degree in business, and graduated at the top of his class with a Bachelor of Commerce from the University of Ranchi in 1965. After graduation, Pappy began working as an accountant for the National Tobacco Company of India. He soon became a valued employee but was morally conflicted as he felt that working for a company selling tobacco did not align with the Gospel. He left the company to become the manager of the General Electric Company of India and took on significant responsibilities, which required him to travel all over India on a monthly basis. While travelling, he was able to share the love of Jesus throughout the Indian subcontinent. On New Year’s Eve in 1970, Pappy married Kunjamma Zachariah, daughter of Mr. Chakalayil Koshy Zachariah and Mrs. Aleyamma Zachariah. She was the love of his life. Over the next 49 years of marriage, they cooked spicy fried fish, gigantic turkeys, juicy steaks, and other favorites, while building a family together. In 1974, Pappy Kunjukunju immigrated to the United States to further his education and seek a better life for his growing family. Kunjamma and their daughter, Grace, arrived a year later. It was difficult being an immigrant, but Pappy rose to the challenge. He worked full-time while simultaneously going to school to earn his Master of Business Administration from the New York Institute of Technology. He went on to become a certified public accountant and also received a certificate in management accounting. While Pappy provided for his wife and daughter, he also worked to support his brothers and sisters in India, enabling them all to receive an education. In 1977, Pappy began working for the state of New York as a senior insurance examiner. Shortly after, his daughter Nancy was born. Six years after Nancy, his youngest child Samuel was born. On May 8,1990, Pappy Kunjukunju became an ordained minister through the Assemblies of God and started Faith Christian Assembly of God. In partnership with his loving wife, Pappy led many people to the Lord. As they preached the Gospel, they saw the hand of God, and witnessed countless miracles of healing. Throughout the entire time, Pappy continued to work to provide for his family. He eventually transitioned from the public sphere to join the private sector and became the Vice President of Golden Eagle Mutual Life Insurance Company. Pappy and Kunjamma’s love and direction led their daughters to become physicians and enabled their son to obtain dual Masters in Business Administration as well as Public Health. Several years later, Pappy returned to New York State and joined the Department of Financial Services, where he worked to help others. He greatly enjoyed working with his colleagues and continued to work until his last days on earth. Pappy was promoted to glory to receive his eternal reward on April 25, 2020. He was dearly loved and will be deeply missed by his wife Kunjamma, son Samuel and daughter-in-law Deepika, daughters Grace and Nancy, son-in-law Adam, and grandchildren Elijah and Nathaniel. God worked through him to touch the lives of many. Pappy fought the good fight, he finished the race, and he kept the faith. We look forward to seeing him again in heaven.

The eldest of eight children, Pappy Kunjukunju was born on August 26,1939 to Varghese and Thankamma Chacko of Vengavilayil House Mathra, in Punalur Kerala, India. He was raised in a Pentecostal Christian home and revered God from an early age.... View Obituary & Service Information

The family of Pappy Kunjukunju created this Life Tributes page to make it easy to share your memories.

The eldest of eight children, Pappy Kunjukunju was born on August...

Send flowers to the Kunjukunju family.