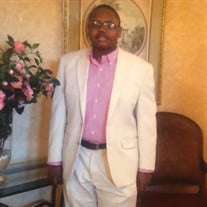 August 26th 1997- February 9th 2022 On February 9th 2022, God called Mr. Nicholas James Barnes home. Nicholas James Barnes was born on August 26th 1992 in Bronxville, NY to Mrs. Verletta Patrice Barnes and the late MR. James Anthony Barnes. Nicholas was diagnoses with a rare disorder Rasuirs disease. It is a rare progressive disorder. Nicholas faced this devastating and debilitating disorder with tenacity and strength. Nicholas was instrumental in finding solutions to overcome this disorder. Nicholas was an extremely caring, kind, and compassionate individual. He completed high school in Peekskill New York, despite the challenges he faced with this disorder. Nicholas’ infectious personality touched everyone he knew and loved. Nicholas was hospitalized frequently since his childhood and always remained positive, strong, and optimistic. He always had a smile on his face, even though he was fighting to live every day. His father James was his world. Nicholas embraced everyone with his love and compassion. He was truly one of a kind and will never be forgotten. Nicholas leaves behind his mother Verletta P Barnes and his amazing siblings, Sentrina Elizabeth Barnes, Kragea Barnes, Garlet Nairchos Barnes, Ashandy Serinnie Barnes, Raldine Barnes, Yanique Barnes, Bianca Barnes, and Rushane Barnes , He was predeceased by his father James Anthony Barnes. He is also survived by a host of relatives in the United Stated, Jamaica and Great Britain. A memorial service will be announced at a later date. Nicholas Barnes was born on August 26, 1997. My baby boy has been our pride and joy since the day he was born. He was the smartest little person with a ton of personality and such a funny kid! Nicholas’ light and radiance made everyone around him smile. Unfortunately, as most of you know Rasmussen's Encephalitis took over his young body from adolescence until the day he passed. Nicholas, being the smartest kid, I know, fought with love and determination for years, to defy the odds! Nicholas was not supposed to be on this earth for this long, and this disease was debilitating, But Nick had other plans. Nick wanted to come home and never gave up the fight. Nicholas went through major brain surgery and came through as spirited and determined as ever. With hope and faith that we would bring him home one day, encouraged Nicholas to fight harder. The support and love from his family and friends through it all, kept him fighting. Even through the loss of his father, he kept fighting and beating the odds. Nicholas was coming home, and he will still come home. Nicholas was reunited with his dad on February 9, 2022 and is finally out of the hospital. I do not want to say goodbye and would like to continue to keep his spirit with us by gathering as family, to the home he longed to return to one day. Let’s celebrate his life in June 2022, together as he would have wished. In lieu of flowers, please light a candle for my son. I hope to see you all soon and thank you for all your love and prayers. Please feel free to any fond memories you have of Nick or share a word of encouragement on the Funeral Home Website.

The family of Nicholas James Barnes created this Life Tributes page to make it easy to share your memories.

Send flowers to the Barnes family.