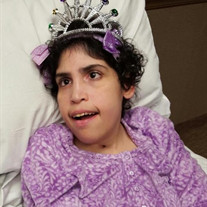 On Tuesday, February 9, 2016 Melissa Ann Garcia went to be with the Lord.  Melissa had the hardest fight of her life when she became ill last year, was intubated and lived in intensive care for months.  Against all odds, her traech was removed; she then began to breathe on her own, as she slowly recovered from a chronic illness. So her sudden death devastated many, as she recently and vibrantly celebrated her 38th birthday. Her parents Carmen Cordova Skrezyna and Vidal Garcia often joked that Melissa was born on one of the worse storms of the century!  On January 16, 1978 after a few feet of fallen snow, Melissa blessed the world with her presence!  Her fierce will helped overcome many obstacles.  At 18 months, she attended the United Cerebral Palsy program in Queens until she was 5 years old…...then attended PS233 through 21 years of age.  Her decades of medical ailments and surgeries never kept her depressed.  And despite her special needs, she glowed with smiles daily and loved unconditionally.  Her hardy laugh that sometimes ended with a screech was amusing, as was her jovial demeanor.  She was adored by many.  She was a real lady, who loved her nails, hair and attired done up nicely.  Her flirtatious edge was delightful because her personality was child-like.  She is survived by her parents and siblings within a living, five generation family, making her passing that much more sorrowful.  Melissa Ann Garcia's wake will be held on Friday, February 12th from 4 - 8pm.  Dwyer & Vanderbilt Funeral Home 90 N Broadway Tarrytown, NY  10591 914-631-0621 Her life will be celebrated, photos and stories shared and a few will eulogize her awesome spirit!  Donations to United Cerebral Palsy of Queens are welcome. Special thanks to all who genuinely & lovingly cared for Melissa, throughout her Life in Queens, NY, as well as, many who nurtured her back to recovery when she moved up to Rockland County.  Dr. Mehta and his vent unit at Northern Manor Multicare relieved her of a troublesome traech.  They gave Melissa back to her family, tube free, for months of hugs and laughs. We will be forever grateful to all who loved Melissa and wholeheartedly enjoyed her quirky personality. Rest in peace & God bless you, Melissa Ann.  We will endlessly love you!

On Tuesday, February 9, 2016 Melissa Ann Garcia went to be with the Lord.  Melissa had the hardest fight of her life when she became ill last year, was intubated and lived in intensive care for months.  Against all odds, her traech was removed;... View Obituary & Service Information

The family of Melissa Ann Garcia created this Life Tributes page to make it easy to share your memories.

Send flowers to the Garcia family.