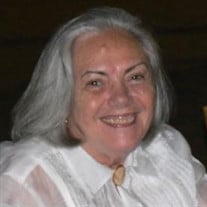 December 22, 1933 – March 13, 2020 Marta M. Roman, 86, of Yorktown Heights, New York, died suddenly of a stroke on March 13, 2020. Marta was a loving mother and grandmother. She is survived by her children John R. Roman, Lydia Roman-Reynolds and Dina M. Roman, daughter-in-law Irene Roman, grandchildren John M. Roman and Christina Roman. She is preceded in death by her parents Antonio and Irma Lanfrit, and siblings Bruno Lanfrit, Anthony Lanfrit, and Rose Mary Ardolino. Marta was born in 1933 in the town of Udine in northern Italy. She and her family emigrated to the United States during WWII and settled in the Bronx, New York. After completing her education there, she went to live and work in Manhattan, where she eventually met her husband and started a family. After raising her three children in Queens, New York, Marta re-entered the workforce and had a long and fulfilling career at Blue Cross Blue Shield NY. In her retirement years, she donated time to activities for the poor and elderly through her church in northern Westchester, where she moved to be closer to her children. She loved fashion and design, gardening, cooking, and having lively conversations with family and friends. Marta’s faith was important to her. In lieu of flowers, the family requests that donations be made in her memory to Catholic Charities U.S.A. located here: http://bit.ly/2vmmViH.

The family of Marta M. Roman created this Life Tributes page to make it easy to share your memories.

Send flowers to the Roman family.