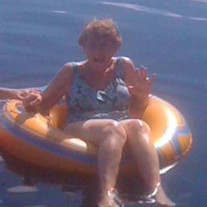 Marion Joan (nee Seguso) DeCaprio, of Elmsford, New York, died Friday, March 17, 2017 of complications from dementia. Born and raised in Eastchester, New York, Marion graduated from Eastchester High School and Endicott Junior College in Beverly, Massachusetts.  She then worked at J. Walter Thompson in New York City in the advertising department until her marriage to Dr. Vincent H. DeCaprio, of Pelham, New York.   She and her beloved husband, to whom she was married for more than 60 years, had six children and 4 grandchildren, to whom they devoted their lives to raising.  Despite a very busy family life, Marion was active as a volunteer in various community organizations.  She was a founding member of the Pocantico Hills School Community Association, the school from which all of her children graduated, and an enthusiastic booster of the Pocantico Hills Swim Team.  She was also a member of the Ladies Guild of St. Mary Magdalene Church in Tarrytown, New York where she attended Mass on Sundays.  She was a volunteer in the Westchester County Medical Center Auxiliary and worked as a volunteer in the Coffee Shop in the Medical Center.  She spearheaded the Centerfest fundraiser for the Medical Center for several years, identifying and engaging the sponsors for the event.  As an active member of the 26th Twig of Rye, New York for many years, she worked on various fundraising activities, including chairing the annual Mayfair event along with the dedicated group of volunteers whose help and support made the annual event a great success and which helped support United Hospital and other local area hospitals.  She was also a member of the Westchester County Medical Society Auxiliary where she was Scholarship Chairman, and later as President of the Auxiliary, worked with Judge Jeanine Pirro to support the foundation established by Judge Pirro for battered women, My Sister’s Place. Marion is survived by her husband, Vincent, her sons John, Paul, Peter and Thomas, her daughters, Mary Ellen and Carolyn, daughters-in-law Marie (Conti) and Diane (Graboski) and her grandchildren, Alec, Sam, Emma and Liza. Reposing, Dwyer & Vanderbilt Funeral Home, Wednesday from 4-8 PM. Funeral Mass, Transfiguration Church, Tarrytown, NY on Thursday 10:30 AM. Interment, Gate of Heaven Cemetery, Hawthorne, NY to follow. In lieu of flowers, the family requests that donations be made to My Sister’s Place in Marion’s name http://www.mspny.org/donate/ DWYER & VANDERBILT FUNERAL HOME 90 N. Broadway Tarrytown, New York 10591 914-631-0621

The family of Marion Joan (Seguso) DeCaprio created this Life Tributes page to make it easy to share your memories.