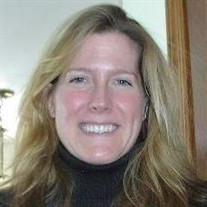 Madeline S. McEneney, age 50, passed away suddenly on Saturday, February 8th, 2020, at her home in Tarrytown, New York. Madeline was born to Edward J McEneney and the late Marcia (Stifle) McEneney in Woodlawn, N.Y. In 1976 the family, including her brother Edward, moved to Katonah, N.Y. where Madeline attended St. Patrick's Elementary School, Yorktown Heights, N.Y. In August of 1985, her father married Barbara Sarson bringing together a blended family of 5 children. Madeline's youngest sister, Margaret Mary was born in 1986 bringing the number of children to six. Madeline Graduated from Kennedy Catholic in Somers, N.Y. and earned her bachelors degree from Marist College in 1991, after having spent her junior year abroad at Trinity All Saints, Leeds University UK. Madeline, then transformed her gift for storyteling and vivid imagination into a career in Television working on such shows as "Where in the World is Carmen San Diego" and "Bear in the Big Blue House." As President and producer of her own production company, Triple 8 Park Pictures, specializing in documentaries, Madeline went on to produce "Le Pardon" which was shown at 24 Festivals and won 8 awards. While she had a passion for films and film making, some of her best work was for the private audience of her nieces and nephews. She loved Spending time with them. She put joy in the hearts of virtually everyone she met. Madeline is survived by her parents Ed and Barbara, her brother Edward (Didi) McEneney, Aunt J M Stifle, her sisters Catherine (John) Winter, Theresa (Chris) Yarber, her brother Peter Sarson and her sister Margaret Mary (Tom) Green, eight adoring nieces and nephews and many aunts uncles and cousins. Madeline will be in Repose on Friday February 14th from 4-9pm at Dwyer & Michael's Funeral Home, 90 North Broadway Tarrytown, New York, 10591. A Funeral Mass of Christian Burial will be celebrated Saturday February 15th, 10:30am at the Church of The Transfiguration, 268 S. Broadway Tarrytown, N.Y. Interment will follw at Gate of Heaven Cemetery Hawthorne, N.Y. In Lieu of flowers please make donations in Madeline's name to: Warner Library-121 North Broadway, Tarrytown, N.Y. 10591 or a charity of your choice.

Madeline S. McEneney, age 50, passed away suddenly on Saturday, February 8th, 2020, at her home in Tarrytown, New York. Madeline was born to Edward J McEneney and the late Marcia (Stifle) McEneney in Woodlawn, N.Y. In 1976 the family, including... View Obituary & Service Information

The family of Madeline McEneney created this Life Tributes page to make it easy to share your memories.

Send flowers to the McEneney family.