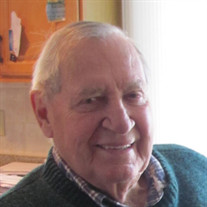 Joseph (Joe) M. Callahan Jr. passed away on May 5th after a short illness. Joe was born in Albany, New York on July 18, 1929 to the late Joseph and Kathryn Callahan. He along with his sister and two brothers were raised in Troy, New York. Joe graduated from LaSalle Military Academy in 1947. He then went on to Williams College where he graduated in 1951 with a degree in English. While at Williams he was a proud member of the Delta Kappa Epsilon fraternity (The Dekes). During his years at Williams he was a member of the ROTC program. After graduating Joe joined the United States Air Force as an officer and served during the Korean War era. He received his Honorable Discharge as a First Lieutenant in 1953. After discharge Joe attended The Wharton School of the University of Pennsylvania where he received his MBA. After graduating Joe moved to New York City to begin a career in finance. For many years he was employed by Blyth & Co. on Wall Street. He was in the banking industry until his retirement at the age of 76. While living in New York City he met his future wife Margaret (Peg) Connelly. They were married on September 7, 1957 in Camden, Maine. Shortly thereafter they relocated to Tarrytown, NY where they raised their family and formed many long lasting friendships. Joe is survived by his children Joe Callahan (Sharon) of Tarrytown, Kate Couture (Steve) of Somers, NY and David Callahan (Lori) of Wilbraham, MA . and his brother Dan of Steamboat Springs, CO. He also leaves behind his ten beloved grandchildren, Joseph, Courtney, Erin, Mark, Tim, Meghan, Mike, Jack, Lilly and Bridget. He leaves numerous nieces and nephews as well as grand nieces and nephews. Joe was predeceased by his wife Peg, his son Mark, his sister Patricia and brother Peter. During his years in Tarrytown Joe was active in many community organizations: Tarrytown Dad’s Club baseball league, a longtime member and past president of the Tarry Crest Swim and Tennis Club, a founding member of the Sleepy Hollow High School Hockey Boosters, elected board member of the Public Schools of the Tarrytowns, long time board member of the Volunteer Ambulance Corps, a member of the Tarrytown Traffic Committee, and an active parishioner of Transfiguration Church. Calling hours will be Thursday 4PM-8PM at Dwyer & Michael’s Funeral Home 90 N. Broadway Tarrytown, N.Y. 10591 (Formerly Dwyer & Vanderbilt). The funeral Mass of Christian Burial will be Friday at 10:30AM at Transfiguration Church in Tarrytown. Interment will follow at Sleepy Hollow Cemetery with Military Honors. In lieu of flowers the family asks that donations be made in his name to the Tarrytown Volunteer Ambulance Corps.

Joseph (Joe) M. Callahan Jr. passed away on May 5th after a short illness. Joe was born in Albany, New York on July 18, 1929 to the late Joseph and Kathryn Callahan. He along with his sister and two brothers were raised in Troy, New York.... View Obituary & Service Information

The family of Joseph M. Callahan Jr. created this Life Tributes page to make it easy to share your memories.

Joseph (Joe) M. Callahan Jr. passed away on May 5th after a short...

Send flowers to the Callahan family.