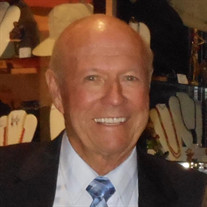 Joseph P. Bannon, 91, passed away at his home in Ormond Beach, FL on November 23,2020. Born in Tarrytown, NY to Joseph T. and Aline Bannon, he proudly lived in Tarrytown and nearby Pleasantville for many years. Joe graduated from Washington Irving High School in 1947. A gifted athlete, he starred on the football, basketball, and track teams. His talent as the running guard on the school’s football team was legendary. He served in the U.S. Army during the Korean War and was stationed at bases in Alabama and Georgia. While in the Army, Joe married his high school sweetheart, Marie Rizzi. Upon completion of his military service the young couple returned to Tarrytown to start their family. They subsequently moved to a new home in Pleasantville where they resided until the 1990’s, relocating to Ormond Beach in retirement. Joe was a banker for more than 35 years, first with The Country Trust Company and then the Bank of New York, retiring in 1986 as the bank’s Vice President of Operations. He was a graduate of the American Institute of Banking and the American Bankers Association’s prestigious Stonier Graduate School of Banking at Rutgers University. Joe also served as an officer of the Westchester chapter of AMS and the Dad’s Club of Pleasantville, and as a Deacon of the First Presbyterian Church of Pleasantville. He was a champion on and off the football field. He was patriotic, freely assisted others, loved animals, and was a loyal friend and mentor to many. He will be remembered as the “go-to guy” who quietly and creatively solved difficult problems that no one else would touch, often doing so without being asked and always without any desire for recognition. But nothing was more important to him than his family. His goal was to make sure they were able to live their lives to the fullest and he unequivocally succeeded. A devoted husband, father and grandfather, he cherished vacations in Wildwood, NJ, afternoons on the beach, get-togethers with the Bannon and Rizzi families, and watching his granddaughter perform. He holds a special place in the hearts of all who knew him, especially those who were the recipients of his kindness. He is survived by his wife of nearly 70 years, Marie, son Joseph, Jr. and wife Maureen, daughter Pattie and her husband Timothy, and beloved granddaughter Erin Burniston. Visitation will be from 4:00pm to 8:00pm on December 3rd, and a service will be held at 10:00am on December 4th both at Dwyer & Michael's Funeral Home, 90 North Broadway, Tarrytown, NY. Interment will follow at Sleepy Hollow Cemetery. In lieu of flowers, donations can be made in Joe’s name to the ASPCA www.aspca.org

Joseph P. Bannon, 91, passed away at his home in Ormond Beach, FL on November 23,2020. Born in Tarrytown, NY to Joseph T. and Aline Bannon, he proudly lived in Tarrytown and nearby Pleasantville for many years. Joe graduated from Washington... View Obituary & Service Information

The family of Joseph Patrick Bannon created this Life Tributes page to make it easy to share your memories.

Send flowers to the Bannon family.