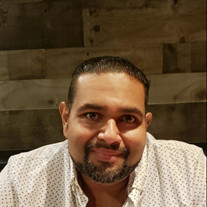 Jose Alberto Matta Jr. of the Bronx, New York, passed away on Monday, November 15th, 2021 after a 26 month battle with cancer. He leaves behind his parents Ernestine and Jose Matta Sr, his beloved grandmother Esther Rivera, brother Christopher Lee Matta, son Byran A. Matta, fiance Erica Gendler along with her son Jacob, bonus brother Antonio Matta, three cats, Macy, Phoebe and Gracie and large extended family and close friends he considered brothers. As a former athlete, his career opportunity in football ended with a devastating knee injury, although his professional goals changed to the Finance Industry, Auditing for large banks and insurance companies, sports were always on his mind. He was married to football during the season, but after Super Bowl he focused on his enjoyment of cooking, music, watching movies, enjoying stand up comedy and mixed martial arts competitions on television. Jose was a "different kind of cat" as he would put it. He kept only a handful of friends, people he felt more like family with. He was highly selective with those he chose to be part of his circle. Jose spoke about how life could have been. He possibly never would have started a job at the World Trade Center. If he hadn't he may never have gotten the esophageal cancer that took his life. Jose was a devoted father and (acting) stepfather. He did everything he could to show the boys how to live as men. He painstakingly taught them what it takes to survive. He emphasized independence and hard work. He set a wonderful example for them. Jose was a fun loving partner and devoted friend. He was a good listener, often able to remind others of thoughts and memories long forgotten. He enjoyed laughing, cooking and dining, always rating and judging chefs and their cuisines. His famous lasagna was a Christmas highlight that will be carried on as close to his recipe as possible. He was loved, he was brave, he was simply unforgettable and he deserved a much better hand than he was dealt. Burial will take place on Saturday, November 20th at Dale Cemetery in Ossining, New York. Donations in his name can be made to Northern Westchester Hospital in thanks for the care he received during his battle.

The family of Jose Alberto Matta Jr. created this Life Tributes page to make it easy to share your memories.

Jose Alberto Matta Jr. of the Bronx, New York, passed away on...

Send flowers to the Matta family.