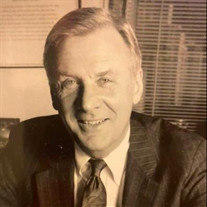 James Warner Rush left us peacefully on November 5, 2021 at the age of 87. Warner was born on September 29, in Mount Tabor, NJ to William Roy Rush and Frances Shannon Rush and shared his childhood with Brother Skip (Robert) Rush and sister Elaine (Rush) Fisher and of course his best friend Sammy Wythe. Warner married his wife Nancy of 64 years at St. Philip Neri, Bronx NY on January 26, 1957. Their marriage was a true partnership throughout the many vicissitudes of life. Together they raised four children, nine grandchildren and two great grandchildren. After graduating Boonton HS, NJ, and attending Lafayette College, Warner began his career as a DJ for WCRV in Washington, NJ. He quickly worked his way toward Sales Manager before moving on in 1960 when he became Sales Manager of Herald Tribune’s WGHQ in Kingston, NY. In 1963 he moved to NYC to accept a position as Account Executive with WINS. Following his two years at WINS, Warner became an Account Executive with WNBC-NY and, a few years later, he became General Sales Manager of WHN NY. Warner entered the national radio representative industry in 1973 as Executive Vice President/General Sales Manager of Major Market Radio. In 1979 Warner became the President of Major Market Radio where he remained the next 25 years. Once absorbed by Interep, the company continued to thrive under his leadership with Warner winning the Chairman Circle Award in 1998. In 1980 Warner revolutionized the radio rep industry with his first of many annual information sharing “FLY-INs.” His goal was to "bring people together to make radio a better business.” Warner had an unrelenting drive for excellence in all he did. He was proud of his career, the countless people he mentored and how he impacted the industry. He was a lifelong learner who loved history, reading, and the power of words. One of his greatest opportunities was to travel with surviving members of the 29th Infantry Division of the Army and document the 50th anniversary of the D-Day landing in Normandy. In business and in his personal life, relationships were everything. He was the consummate gentleman and was driven by an unending desire to bring joy to others. His kindness and compassion was limitless whether he knew you for years or just met you. Warner jogged along the great wall of China, felt at home on his travels to Ireland. But he was equally happy forging relationships with everyone he met along his daily trips to the bakery, dry cleaners or the supermarket. There wasn’t a language he didn’t learn in which to say “hello” or “I love you.” He found a way to connect with everyone he crossed paths with and in only a few moments could always leave a lasting impact. He was the champion of the underdog. Always with a motivational word, quote, speech to inspire all. Diagnosed with a rare kidney disease, Amyloidosis, Warner was given a second lease on life and later a third. He was blessed with his generous sister Elaine’s kidney donation in 2002, and again in January, 2010 by the McElroy family in memory of their son Glenn McElroy. He was forever grateful for these blessings and remained an active advocate for organ donation. Family, friends and faith were what mattered most to Warner. One of the greatest joys of his life was converting to Catholicism. He worked tirelessly to motivate and unconditionally support us all through life’s challenges. To know Warner was to know his love of bringing people together in song, dance and celebration. May we all honor him by continuing to celebrate the life he lived. Warner is survived by his wife Nancy, his children Julia (Rush) French, Jamie Rush and wife Rita, Jennifer Rush, Jessica (Rush) Dellinger and husband Michael. Sister Elaine Fisher and husband Clifford (Skip). Grandchildren, Katie (French) DeSantis and husband Steve, Erin French, Octavia Rush Crowell, Owen Rush Crowell, James Patrick Rush, Maggie Rush, Shannon Rush, William Dellinger, Brendan Dellinger and great grandchildren Carson and Jason Desantis. He is survived by many loving nephews and nieces. Calling hours will be held at Dwyer and Michael’s Funeral Home at 90 North Broadway, Tarrytown, NY on November 14th from 1-5pm. A funeral mass to celebrate Warner's life will be held on Monday, November 15th at the Roman Catholic Church of the Magdalene, 525 Bedford Road, Sleepy Hollow, NY at 10:00am. Burial will take Place at Gate of Heaven Cemetery. In lieu of flowers, donations can be made to the National Kidney Foundation. “Make someone happy, make just one someone happy and you will be happy too.” - Jimmy Durante

James Warner Rush left us peacefully on November 5, 2021 at the age of 87. Warner was born on September 29, in Mount Tabor, NJ to William Roy Rush and Frances Shannon Rush and shared his childhood with Brother Skip (Robert) Rush and sister... View Obituary & Service Information

The family of James Warner Rush created this Life Tributes page to make it easy to share your memories.

Send flowers to the Rush family.