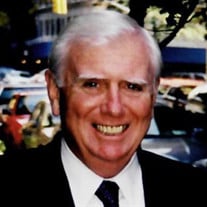 James J. Hagan, 87, died peacefully last Sunday surrounded by loved ones in his family home in Pocantico Hills, New York. Hagan was a proud first generation American, born in Manhattan in 1933 to Mary Flaherty and Michael Hagan, immigrants from Scotland and Ireland, respectively. Hagan was a graduate of the Ascension School (1947), Regis High School (1951), Fordham University (1955) and Columbia Law School (1961), all of which he supported throughout his lifetime. Prior to attending law school, Hagan served in the United States Airforce where he met lifelong friend Michael Hayes, who went on to marry Hagan’s only sister Sheila (who passed in 2020). Hagan was a gifted and distinguished attorney, having spent his entire career at Simpson, Thacher & Bartlett in New York, becoming a partner and later co-chair of the Litigation Department. Despite his many professional accomplishments, including successfully arguing before the United States Supreme Court, he was perhaps most proud of his early civil rights pro bono work in the 1960s on behalf of the NAACP in Jackson, Mississippi. Hagan is survived by his beloved wife Louise, with whom he recently celebrated their 61st wedding anniversary. He will be dearly missed by his four devoted daughters, Victoria, Christine, Marianne and Joanna, his three sons-in-law, Michael Berman, Peter Sawkins and Matthew Rego, his six grandchildren, Emma, Alex, Harry, Cate, James and Josephine and his five nieces, Laura, Allison, Susannah, Gina and Nathalie. Hagan was an avid traveler, a voracious reader of non- fiction, a lover of film and theater, and each summer looked forward to spending time by the sea with his children and grandchildren in Nantucket. His was a life well lived. A funeral mass will be held on Saturday, September 18 at 10:00 am at the Church of the Magdalene, 525 Bedford Rd, Pocantico Hills, NY 10591. There will be a private burial. The family respectfully asks that if so inclined, in lieu of flowers, donations be made to Hagan's alma mater, Regis High School, a private secondary school offering full merit-based scholarships to all of its students. Www.Regis.org/give

The family of James J. Hagan created this Life Tributes page to make it easy to share your memories.

Send flowers to the Hagan family.