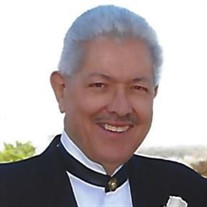 Hubert Muschett was born on September 6,1934 in the Bronx, New York. He entered into eternal rest on February 18, 2021. He was the loving husband to his wife of 65 years Joan, the dear father of Tina and Leza, a loving grandfather to Ivan, Theresa and Justin, great grandfather to his first great granddaughter Taylor. He was also a brother to Arnold and Ruby Muschett, uncle to John Muschett, father in law to Jose Fabian Rivera and he deeply loved the wives of his grandsons, Sheena and Cynamen. On September 17,1955 Hubert married his childhood sweetheart Joan. They met each other at 12 years of age. He told his family he was in love with Joan from the first moment he set eyes on her. On their 50th anniversary Hubert and Joan once again resealed their love and marriage vows. At 21, Hubert proudly entered the New York City Police Department. He was stationed at the 34th Precinct and served this community for 23 years. During his career on the police force he was also promoted to Detective. After his retirement from the New York City Police Department, Hubert became the business owner of Dykman Deli in Washington Heights, N.Y. Known to the community as Bert, Dykman Deli became the infamous lunch spot for many Policemen, Firemen, Con Edison and Construction workers. After 17years, he sold Dykman Deli and became a supervisor at American Armored Car in Elmsford, N.Y. Hubert worked until he was 71 years of age. Hubert’s main enjoyment in life was his family. He loved to travel. The island of Aruba became his second home. His grandchildren enjoyed their trips to “Aruba house”. He also enjoyed the Bahamas, Bermuda and Puerto Rico, Beaches with white sand, islands with warm sunshine and beautiful sunsets, were his favorite form of relaxation. On many occasions his family traveled along. His second pleasure in life was dancing to all forms of Spanish music with his life long partner Joan. He and Joan were known to “cut a rug”, win dance contests and were able to amaze others off the dance floor. He also enjoyed playing poker and taking his wife Joan to the Casino. He leaves us with many fond memories. Family trips, the laughter of family games and the holidays they always shared together. Most importantly, he gave his family and friends the eternal gift of his love.

Hubert Muschett was born on September 6,1934 in the Bronx, New York. He entered into eternal rest on February 18, 2021. He was the loving husband to his wife of 65 years Joan, the dear father of Tina and Leza, a loving grandfather to Ivan,... View Obituary & Service Information

The family of Hubert Muschett created this Life Tributes page to make it easy to share your memories.

Send flowers to the Muschett family.