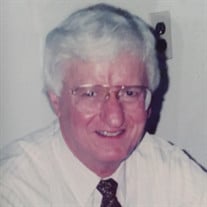 Herbert Peter LeFevre, 94, a fifty-year resident of Tarrytown, passed away peacefully on June 2 surrounded by his family. Herbert was born in Kingston, NY on March 7, 1925 to Elton Peter LeFevre and Viola Barbara Teich. Herbert grew up in New Paltz, NY, graduating from New Paltz High School in 1943. He proudly served his country in World War II as a member of the United States Army. He became a paratrooper with the 517th Parachute Regimental Combat Team, which joined the 82nd Airborne. Herbert was in the Ardennes Campaign, including the Battle of the Bulge. He earned the Bronze Star Medal. Herbert graduated from Rollins College (Florida) where he played baseball. He then attended Cornell School of Hotel Management. He worked for IBM, Marriott, and then for Vulcan Hart Corporation for many years selling commercial food service equipment. Herb enjoyed the Adirondack Mountains and it was there that he met his loving wife of 48 years, Anne DiRenzo LeFevre. Herbert is survived by his daughter, Camille Barbara LeFevre Agro (Louis) of Irvington, two grandsons, Louis Peter and James Anthony Agro, and many nieces and nephews. He was predeceased by his beloved wife Anne and his two brothers, Elton and Wesley. Herbert was proud of his New Paltz roots and heritage. Along with Anne, he was active in the Huguenot Historical Society of New Paltz for many years. Herb was an avid outdoorsman, conservationist and golfer. He loved to spend time with his family, especially at their camp in the Adirondacks, hiking, fishing and sharing stories around the campfire. Herb loved to watch his grandsons play baseball and delighted in their love of the sport. Herb had a great sense of humor and a kind spirit. He will be forever loved and truly missed. Reposing at Dwyer & Michael’s Funeral Home 90 N. Broadway Tarrytown, N.Y. 10591 (Parking entrance the corner of McKeel Ave. and Broadway) on Thursday June 6th from 4-8pm. A Funeral Mass of Christian Burial will be held on Friday 10:30am at Transfiguration Church in Tarrytown. Interment with Military honors will follow at Sleepy Hollow Cemetery. In lieu of flowers, donations may be made to the Huguenot Historical Society, New Paltz, NY. The family would also like to thank Cabrini of Westchester, 2 South, (Dobbs Ferry) and Westchester Care at Home for their care over the last few years.

Herbert Peter LeFevre, 94, a fifty-year resident of Tarrytown, passed away peacefully on June 2 surrounded by his family. Herbert was born in Kingston, NY on March 7, 1925 to Elton Peter LeFevre and Viola Barbara Teich. Herbert grew up in... View Obituary & Service Information

The family of Herbert Peter LeFevre created this Life Tributes page to make it easy to share your memories.

Send flowers to the LeFevre family.