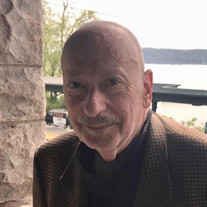 Herbert Hadad, an award-winning writer, who specialized in the topics of family and the Middle East, passed away on November 6, 2021 at his home in Pocantico Hills, New York. He was 85. Born October 6, 1936 in upper Manhattan to Syrian and Jewish parents, his family soon moved to Boston where he grew up in the neighborhoods of Dorchester and Roxbury. He attended Roxbury Memorial High School and graduated with a Bachelor of Science from Northeastern University. He would tell you that the education that set the course of his life, however, took place in his early twenties working as a copy boy in the newsroom of the Boston Globe and in the ring moonlighting as a featherweight boxer in dusty gyms across Boston. Intoxicated with the thrill of writing and covering the news, he would achieve a celebrated career as a reporter, essayist, public relations representative, speech writer, and press officer. He was the author of two books, Finding Immortality: The Making of One American Family, and Tender and Tough: 60 Years of Storytelling. His essays appeared in publications including The New York Times, The International Herald Tribune, Parenting, Reader’s Digest, Poets & Writers, and several anthologies. He worked as a reporter for The New York Times, New York Post, Boston Globe and the Keene Sentinel of New Hampshire. He won writing awards from the New York Press Club, Council for the Advancement and Support of Education, Folio magazine and others. Herbert had countless fascinating personal and professional tales along the way, but his most coveted adventure started in 1972 when he met Mary Evelyn Meekins in New York. They would marry in 1975, move to Tarrytown, New York, have three children, and then settle in Pocantico Hills where he lived for the last 40 years. His true dream was to be a father and family man. Many of his stories explore the pleasures and pains of marriage and fatherhood with humor, insight, and uncompromising honesty. He had an observational gift for reflecting on the multitude of life’s little wonders that take place every day, such as the uplifting conversation with a stranger in the park, the pleasure of waving to a passing train, or the investigation of his children’s questions on life. Much of his writing also explored the juxtaposition of his Arab and Jewish heritage. He was a fisherman, a marathoner, a romantic, a flirt, a joke teller, and a fighter who was quick to let you know if he felt he, his family, or his friends were being mistreated. He described himself as a tiger of a father who would do anything for his children, and all three would readily attest to that fact. He adored Evelyn, who was the secret hero in most of his stories. He lionized his parents from which he passed on many lessons, and he loved his country, his city, and a good martini. In fact, he was a founding member of the local Monday Night Martini Club. He joined the 1972 presidential campaign of Senator Edmund Muskie of Maine as the deputy press secretary and spearheaded public relations for a fledgling educational children’s television program called Sesame Street. A character based on him named Herbert Birdsfoot appeared in a number of seasons. He taught writing at the Hudson Valley Writers Center in Sleepy Hollow where he also served on the Board of Directors and the Executive Committee. He was a governor emeritus of the Silurians Press Club, a venerable journalism society, and was a founding board member of the Friends of the Rockefeller State Park Preserve. He also started a cable television program called On Writing with his friend Benjamin Cheever. As a capstone to his career, he proudly served 18 years as a press officer for the U.S. Department of Justice for the Southern District of New York for six U.S. Attorneys including Mary Jo White, James Comey, and Preet Bharara, and received several distinctions for his work. Herbert’s family includes his loving wife Evelyn, his son Edward Hadad and wife Adlin and their children Evan and Willow of Croton-on-Hudson, NY, his son Charles Hadad and wife Alice and their daughter Maya of Brooklyn, NY, his daughter Sara Le Brusq and her son Damian of New York, NY, and his sister Sylvia Rosenberg of Newton, MA. In addition to his immediate family, he had a wide circle of in-laws, cousins, nieces and nephews, friends, students, and colleagues he loved dearly. He was predeceased by his parents Morris and Norma Hadad of Boston and his brother Alvin Hadad of Oakland, CA. Herbert lived a rich and fulfilling life. He reveals in his first book Finding Immortality that the title was chosen as a wish for his stories to live on after he was gone and, except for the names and places, for others to embrace the stories as their own. In the days preceding his passing, his family confirmed for him that not only would he achieve immortality through his stories on the page but also through the vivid memories, lessons, and appreciation from all those who loved him. Funeral notice: A wake will be held on Friday, November 19 from 4:00-8:00PM at Dwyer & Michael's Funeral Home, 90 N Broadway, Tarrytown, NY 10591. The family will give remarks from 7:00-7:30PM. The Hadad family respectfully requests that attendees wear face masks indoors. The following day, Saturday, November 20, at 11:00AM, a funeral mass will be held at The Church of the Magdalene of Pocantico Hills, 525 Bedford Rd, Sleepy Hollow, NY 10591. The Hadad family respectfully requests that attendees wear face masks indoors. After the mass, from 12:30-2:30PM, the family invites all attendees to join them for a reception to remember and celebrate the life of Herbert Hadad at Tramonto, 27 Saw Mill River Rd, Hawthorne, NY. If you're planning on attending, kindly email [email protected] with the subject line: Herbert Hadad Reception. In lieu of flowers, please make donations in his memory to https://www.nudaysyria.org/, an organization that supports women and children in the Middle East affected by humanitarian crises.

Herbert Hadad, an award-winning writer, who specialized in the topics of family and the Middle East, passed away on November 6, 2021 at his home in Pocantico Hills, New York. He was 85. Born October 6, 1936 in upper Manhattan to Syrian and Jewish... View Obituary & Service Information

The family of Herbert Hadad created this Life Tributes page to make it easy to share your memories.

Herbert Hadad, an award-winning writer, who specialized in the...

Send flowers to the Hadad family.