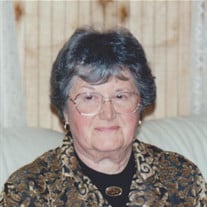 My Mother&#8230;A Legacy of Love Frances Marilyn Roberts Frances was born on Oct.06, 1929 in the Bronx;  historically, the year of the great Depression.She was the only child of Anna and Frederick Heinisch. Her father was a custodian for the... View Obituary & Service Information

The family of Frances Marilyn (Heinisch) Roberts created this Life Tributes page to make it easy to share your memories.

My Mother…A Legacy of Love Frances Marilyn Roberts Frances was...