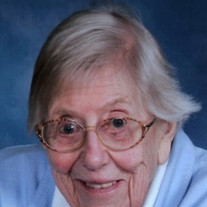 Sleepy Hollow, NY – Ethel Belfanc Killingbeck, 93 of West Chester, PA died peacefully with her family by her side on January 23, 2019 at Phelps Memorial Hospital Center in Sleepy Hollow, NY following a brief illness. She formerly was a resident of Ansonia, CT, Lincoln, VT and Middlebury, VT. Born on April 1, 1925 in Amsterdam, NY, Ethel was the daughter of the late Anna (Ericson) Belfanc and Augustus Henry Belfanc. She resided in Ansonia, CT until 1992 when she moved to Lincoln, VT where she lived until 2012. In August 2012, a few months after her husband’s death, she moved to West Chester, PA where she lived until her death. Ethel graduated from Ansonia High School in 1942 and then attended Sargent College of Boston University where she received her Bachelor of Science degree in Physical Education in 1946. While in college, she was employed as an athletic and pioneer counselor for the Tripp Lake Camp in Portland, ME during the summers. In the fall of 1946, she moved to Salt Lake City, UT where she was a physical education teacher at Rowland Hall School from 1946-1951. Ethel returned to Ansonia and soon began her career as a Girl Scout professional. Her interest in scouting began in grade school when she became a Girl Scout. She was active for 10 years serving as president of her Girl Scout troop her senior year. In the summer of 1951, she worked as a counselor at the Ansonia Girl Scout Day Camp and then as a full-time field director for the New Haven Girl Scout Council. During the summer of 1952, she was a unit leader and program director and then advanced to camp director the following year at Camp Townshend in Morris, CT. She left work to raise her children but returned to the workforce part time in the late 1960’s as Assistant Director of Outdoor Programs for the Connecticut Trails Council of Girl Scouts. During the summer she served as Assistant Director of Camp Seeley in Sharon, CT. She was promoted to Director of Outdoor Programs and served in this position until her retirement in 1989. After her retirement, she remained involved in the field as a camp inspector for the American Camping Association. Ethel was predeceased by her husband of 59 years, Rowland Rand Killingbeck and her sister Jean (Belfanc) Northup. She is survived by her three children, David R. Killingbeck of Downingtown, PA, Susan K. Knox and her husband Keith of Ossining, NY and Linda K. Paaymans and her husband Roger of Foley, AL. She also leaves behind her six grandchildren, Blake, Anna and Emma Knox; Christopher, Schuyler and Shannon Paaymans; and her nieces, grandnieces and grandnephews. A memorial service will be held on April 13, 2019 at 11:00am at St. Andrew’s Episcopal Church, 7 Saint Andrews Lane, Glenmoore, PA 19343. Donations may be made in Ethel’s memory to Episcopal Relief and Development by visiting the following website: https://episcopalrelief.org or by mail: Episcopal Relief & Development, P.O. Box 7058 Merrifield, VA 22116-7058.

Sleepy Hollow, NY &#8211; Ethel Belfanc Killingbeck, 93 of West Chester, PA died peacefully with her family by her side on January 23, 2019 at Phelps Memorial Hospital Center in Sleepy Hollow, NY following a brief illness. She formerly was a... View Obituary & Service Information

The family of Ethel Killingbeck created this Life Tributes page to make it easy to share your memories.

Send flowers to the Killingbeck family.