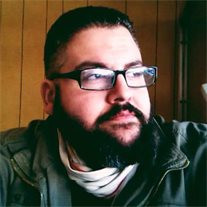 Eloy (E.J.) Matos Jr., 42 years old of Brooklyn, NY, died suddenly, but peacefully from a pulmonary embolism on March 22, 2018. He is survived by his parents Eloy Matos, Sr. and Susan (Ramos) Matos, his brother Oscar Matos, and his fiancé Teresa Sigler. From the many people whose lives he has touched, his wit and wise guy humor will be enjoyed beyond his life. More than anything, he will be remembered as a gentle, intelligent, loving and compassionate man. Eloy was born in Bronx, NY on February 22, 1976. When he was one year old, he and his family moved to Tarrytown, NY, where he would graduate from Sleepy Hallow HS in 1994. After several semesters at Le Moyne College, he enjoyed a successful career at Franklin Covey, rising quickly through the ranks and becoming the youngest district manager in the company’s history.  He then went on to work with his father at their family’s mens clothing store until his father's retirement in 2016. Eloy was then found by Capital One Bank and was on a promising career path once again. One of his many talents was cooking, and he competed in several local competitions, scoring high in every challenge. In auditions, his unparalleled skills earned him a few runner-up spots in televised cooking competitions. But at the end of the day, he would share his love through his gift of cooking. His two other passions were music and throwing a good party, both of which he found a way to make a profit from in his 20’s and 30’s by booking many DJ gigs and party planning events. In light of Eloy’s joyous and beautiful nature, a memorial service will be held at on March 30, 2018 at Dwyer & Vanderbilt Funeral Home from 10am to 12pm. For those who knew Eloy, it will come at no shock that we will be celebrating his memory with good music, laughter and stories. In lieu of flowers donations in Eloy’s name to the SPCA of Briarcliff Manor, NY would be appreciated. DWYER & VANDERBILT FUNERAL HOME 90 N. Broadway Tarrytown, New York 10591 914-631-0621

The family of Eloy Matos Jr. created this Life Tributes page to make it easy to share your memories.

Send flowers to the Matos family.