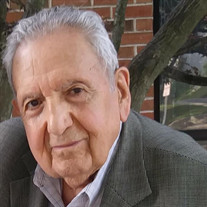 Dr. Elio J. Ippolito, age 86, of Sleepy Hollow, New York passed away on May 14, 2019. He was a loving, generous, and devoted husband, father, grandfather, doctor, and friend to many. Elio was born on March 19, 1933 in White Plains, New York to Frank and Maria Ippolito. He is survived by his wife of 59 years, Elisabetta (Baldi) Ippolito; children Stefania Sakiotis, Alessandra Obregon, Cristina Stainkamp, Lisa Smith, and Daniela Thomas; siblings, Aldo Ippolito, Vera Ippolito (Matsen), Dino Ippolito, Ada Ippolito (Schneider), and Alma Ippolito (Walshak); 13 grandchildren, many nieces, nephews, and friends. He graduated from Scarborough High School where he served as Class President, and from Columbia University. He received his medical degree in Italy from University of Bologna, the oldest medical school in the world founded in 1088. Elio's life was devoted to his family and to helping others. He was working full time in his private practice of Family Medicine for 59 years until March 23, 2019 when he became ill. He was still making house calls to the homebound and sick. Dr. Ippolito had offices in Tarrytown and Ossining. He spoke 3 languages; English, Italian, and Spanish. He was affiliated with Phelps and Westchester Medical Hospital. He suffered from asthma as a child and that inspired him to become a doctor and help people. He delivered babies for at least 10 years. He took care of generations of his patients’ families. He made nursing home rounds at Tarrytown Hall, Bethel, and Brandywine nursing homes. He enjoyed having medical students in his office where he shared his passion for family medicine and his knowledge to young students. Dr. Ippolito was one of a kind, and a very special person. Family Medicine and his patients were a priority. He went above and beyond his calling. He was an amazing doctor and friend to all. He was sensible, intuitive, and very intelligent. He was known all over Westchester County as "the doctor who would see you for free if you did not have the means to pay". He always put others first before himself. He gave to numerous charities. He met his patients after office hours to avoid having them wait hours in an emergency room with a hefty bill. Dr. Ippolito was an old fashioned man who always kept his promises. He loved politics, history, science, travel, gardening, classical music, theater, a good movie, and his wife’s Italian cooking. He also loved his dog, Snowball, an adorable Bichon Frise. Dr. Ippolito was a humble man whose kindness and generosity touched more lives than one could ever imagine. He had an amazing ability to give back to the world in ways that seemed small to him, but would have long lasting impact to those who received it. He was a man whose light will always shine upon us and will rest for eternity in our hearts. He will be deeply missed. He always said he would work until his death. Dr. Ippolito loved God, family, friends, and his patients. In Lieu of Flowers Please Make Donations to the American Cancer Society. Follow The Link Below- American Cancer Society

Dr. Elio J. Ippolito, age 86, of Sleepy Hollow, New York passed away on May 14, 2019. He was a loving, generous, and devoted husband, father, grandfather, doctor, and friend to many. Elio was born on March 19, 1933 in White Plains, New York... View Obituary & Service Information

The family of Dr. Elio Ippolito created this Life Tributes page to make it easy to share your memories.

Send flowers to the Ippolito family.