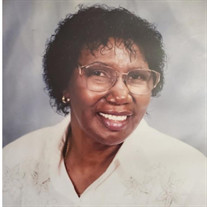 Eleanor Wint of Tarrytown went home to be with her Savior on September 30, 2021. Eleanor was born in Middle Buxton, St Ann, Jamaica on March 31, 1941 to Edwin and Isemenda Thomas. She is preceded by her parents, Edwin and Isemenda, older brother Franklyn, older sister Gertrude and adopted sister Gloria. She is survived by her sister Joyce and brother Samuel. In Jamaica she was the community seamstress but most of all, her beloved job was as a wonderful mother, grandmother and friend to many. She was a tower of strength, had a voice of guidance and lived to serve others. She countlessly opened her doors to family, friends, took care of her grandchildren, and did so much more for others. She was loved by all and had touched many lives in her lifetime. Ms. Eleanor had a heart of gold and tried to help as many as she could with her smile, kindness and understanding. Eleanor migrated from Kingston, Jamaica in 1991 and has lived in Tarrytown since then. Eleanor worked as a home health aide and was loved by all. She became a member of Shiloh Baptist Church in1992 and later where became a Mother of the church. Mother Wint loved the Lord and never missed a moment to praise her God even on her dying bed. She survived by her five (5) children, Sonia Johnson, Eda Meredith, Lockart Johnson, Karlene Wilson and Jacqueline Hassad and step daughter Yvonne Johnson. Mother Wint is also survived by her six (6) grandchildren Colleen Mills, Andre Burte, Michael Johnson, Monique Wallen, Roderika Wilson, and Grace Ann Wilson. And yesssss … she has three (3) great granddaughters, Karter, Chelsea, and Milani. She loved her children and she will be greatly missed by all. You never said I am leaving, You never said goodbye, You were gone before I knew it, And only God knew why, A million times I needed you, A million times I cried If love alone could have saved You, You never would have died. The viewing will be FRIDAY October 15, 2021 from 4PM-8PM at Dwyer and Michael’s Funeral home: 90 North Broadway, Tarrytown, New York The Funeral will be SATURDAY October 16, 2021 at 9:30AM at Dwyer and Michael’s Funeral home: 90 North Broadway, Tarrytown, New York with Burial to follow in Kensico Cemetery. To virtually attend the service on Saturday Morning please click the link below- https://client.tribucast.com/tcid/2260983293

Eleanor Wint of Tarrytown went home to be with her Savior on September 30, 2021. Eleanor was born in Middle Buxton, St Ann, Jamaica on March 31, 1941 to Edwin and Isemenda Thomas. She is preceded by her parents, Edwin and Isemenda, older... View Obituary & Service Information

The family of Eleanor Wint created this Life Tributes page to make it easy to share your memories.

Eleanor Wint of Tarrytown went home to be with her Savior on...

Send flowers to the Wint family.