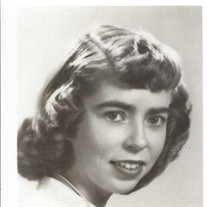 Edna Therese Kiernan was born in N.Y.C. on March 22, 1930 to Anne (Smarz) Kiernan and Edward Kiernan. She and her brother John grew up in the Briarwood section of Queens. Edna was educated in the Queens public schools and graduated from Forest Hills H.S. in 1947. Edna attended the College of Mount Saint Vincent, majoring in English and distinguishing herself by earning the most demerits in her freshman class (for skipping gym and not wearing gloves).After college, Edna worked at House Beautiful magazine as an editorial assistant. In 1952, at the Richmond Hills Young Republicans Club, Edna met Bill Cahill, an engineer who worked for Consolidated Edison. They were married in 1953 at Queen of Peace Church. Edna and Bill settled in Tappan and then West Nyack, where they raised their three children: William, Kathleen, and Madeleine. In the 1970s, Edna went to Iona College, earning a Masters in Education. She then taught junior high English and Social Studies in Irvington. Correcting everyone’s grammar was a lifelong pastime for Edna. In 1980, Edna and Bill moved to St. Francisville, LA., where Bill worked at Gulf States Utilities and then Texas Utilities. They returned to N.Y. in 1994 where Bill worked for New York Power Authority. Bill died in 1997; Edna lived in Tarrytown for the rest of her life. Edna was an excellent musician and played accordion and piano throughout her life, last playing the piano on her 91st birthday. Edna enjoyed playing tennis, bridge, and poker, dancing, singing, swimming, horseback riding, reading Dickens, hosting parties, giving gifts, doing the Jumble word puzzle, and correcting waiters who tried to clear plates before everyone was finished. Edna prided herself on her “N.Y. sense of humor” and her driving skills, successfully retaking her driving test just before she turned 90. Edna went the extra mile to show up for family and friends’ special events well into her 80s. She had exacting standards, but could also be compassionate and warm, especially to those experiencing physical or mental illness. In her final days, Edna was blessed to have the help of her family and the attentive staff of Phelps Hospital. She died on a beautiful spring morning, April 27, 2021 at home, surrounded by loved ones. Edna leaves behind her brother John Kiernan, her son William Cahill (Isabel), daughters Kate Cahill (Patrick Donahue) and Maddy Cahill (Joanne), grandchildren Anne-Marie Cahill, William Marc Cahill (Sonja), Elizabeth Cahill, Megan (Chris) Olsen, Sean (Megan) Donahue, great-grandchildren William Henry Cahill, Emilia and Tennessee Olsen, and Finn Donahue. Edna also leaves her cherished friends Pam Howland and Carmen Maldonado, along with wonderful nieces and nephews, and many loving friends and neighbors. A funeral mass was held on April 30 at the Church of the Transfiguration in Tarrytown.

Edna Therese Kiernan was born in N.Y.C. on March 22, 1930 to Anne (Smarz) Kiernan and Edward Kiernan. She and her brother John grew up in the Briarwood section of Queens. Edna was educated in the Queens public schools and graduated from Forest... View Obituary & Service Information

The family of Edna Therese Kiernan Cahill created this Life Tributes page to make it easy to share your memories.