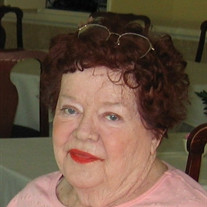 Dorothy C. (Cronin) Harmonay, a longtime resident of Irvington, died at Westchester Medical Center on May 18, 2015 after a short illness.  She was 90. The daughter of Alice and Vincent Cronin, Dorothy was born in Yonkers and graduated from Roosevelt High School, and subsequently worked as a secretary at The Conference Board.  From an early age, she demonstrated an insatiable passion for music and for singing.  Blessed with a beautiful soprano voice, she was for many years a devoted member of the Choir at Immaculate Conception Church, and loved to entertain guests and extended family at parties and gatherings whenever a piano was near. She maintained a seasonal residence on the golf course at the Quail Ridge Country Club in Boynton Beach, FL until 2012 and was for many years a member of Knollwood and Ardsley Country Clubs, where she enjoyed playing golf and lunching with the ladies.  Dorothy was a talented seamstress and had a special place in her heart for dogs, especially Labrador Retrievers. She is survived by her son, S. Leo Harmonay, Jr., of Peekskill, her daughters Barbara Harmonay Armiento of Acton, Mass. and Maureen Harmonay of Sterling, Mass., her son-in-law, Craig Armiento, her brother, Vincent Cronin of Hartwick, NY, her sister, Alicia Talvi of Buffalo, NY, her grandchildren, Bryan Armiento of Charlotte, North Carolina, Kaitlyn Armiento of Medford, Mass., Stephen L. Harmonay III of Orlando, Florida, and Delaney Harmonay of Orlando, Florida, and many nieces and nephews.   She is predeceased by her beloved husband, S. Leo Harmonay, and by her daughter, Janice Harmonay. Visiting hours will be from 4-8 pm on Thursday, May 21 at the Dwyer & Vanderbilt Funeral Home in Tarrytown.  A funeral Mass will be celebrated on Friday morning, May 22 at Immaculate Conception Church in Irvington, followed by burial at the Gate of Heaven Cemetery in Valhalla. In lieu of flowers, contributions can be sent in Dorothy’s memory to Immaculate Conception Church, 16 N. Broadway, Irvington 10533.

Dorothy C. (Cronin) Harmonay, a longtime resident of Irvington, died at Westchester Medical Center on May 18, 2015 after a short illness.  She was 90. The daughter of Alice and Vincent Cronin, Dorothy was born in Yonkers and graduated from Roosevelt... View Obituary & Service Information

The family of Dorothy Catherine (Cronin) Harmonay created this Life Tributes page to make it easy to share your memories.