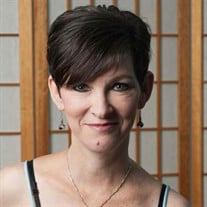 Donnette Heath Gaicochea- July 21, 1968 - April 4, 2020 Donnette Lee Heath entered this world on July 21st, 1968 as the second child of her father, Don Lee Heath, and her mother, Yvonna Mae Galloway Heath, and as younger sister to David Scott Heath. From that moment forward, she danced into everyone’s hearts. That gift of dance became a passion that led her to pursue many of her life dreams and spread her light and grace to all. As a youth and young adult, she was a cherished member of the Lumberton High School Raiderettes, Kilgore Junior College Rangerettes, and the Sam Houston State University Modern Dance Department. During her time in each of these organizations, not only did she shine on stage and connect instantly with her audience, but she also made many lifelong connections and friendships. Those who have known her since those days have recounted many times when she provided them love, encouragement, and inspiration. This ability to give a part of her heart in every relationship was one of her innate gifts. After college she moved to Salt Lake City and later to San Francisco to pursue her dream of a career in dance. Ultimately, she started her own dance company, Dance Repertory (dancerepertory.org). Through her experiences dancing and directing, she discovered her greater life’s passion of empowering young people through dance education to love themselves in their own journey. Dance Repertory became her outlet to inspire thousands of lives, both young and old, over nearly two decades through her beloved Vision Series program. In the midst of pursuing her dance dreams, Donnette met and married Josh Gaicochea. The two of them made a home in New York City and soon found great joy as they brought their son, Noah, into the world. Noah became the light of her life. He was her constant sidekick. All who knew Donnette, knew Noah, too, because she utterly beamed when she spoke of him. Being the best mother she could be became her greatest passion in life. As a young family, Donnette, Josh, and Noah moved to Tarrytown, NY. There Donnette devoted herself to caring for her family and continuing to expand her circle of friends through involvement in the community and her work at New York Life, all while striving to continue her dance work in San Francisco. All of these earthly experiences nearly ended for her in January 2013 when she had her first massive stroke. Donnette showed the world at that time that she was a fighter and wouldn’t let the damage to her brain hold her down. Despite losing much of the mobility on her left side, and with support from her family, and most of all, her son, Noah, Donnette proved her strength to the world and embarked to use her God-given talents to spread her message of loving and caring for oneself, cherishing moments as they come, and counting the blessings all around us. She did so by inspiring others to use dance to become beacons of light to all around them. Just over seven years later, her loved ones were devastated to learn she had once again suffered a massive stroke. This one proved to be a call home from our Father in Heaven. On April 4, 2020, Donnette left this mortal world and was healed of her earthly burdens by His great power. No doubt she entered heaven dancing, just as she had danced into this earthly world almost 52 years earlier. United in loving Donnette, we know that her impact will not end if each of us continues to dance strong for Donnette and spread her message of love to all we meet. In this way, her light will continue to shine. We know Donnette will be looking over those of her family and friends still living - her beloved son, Noah Gaicochea, his father, Josh Gaicochea, her older brother, David Heath, her younger sister, Sharon (Robert) White, her step-mother, Theresa Heath, many nieces and nephews, and countless cherished friends. We feel assured Donnette has rejoiced as she has joined those of her family already departed from this life, including her mother, Yvonna Galloway, and her father, Don Heath. ———————————————————————— Friends, your expressions of love have brought a measure of peace to our souls. We cannot have a fitting memorial service at this time due to COVID-19. There may be something planned in the future. In lieu of this, we ask you to please share stories, cherished memories, or pictures of Donnette. You can post them on this tribute page, on the Dancing Strong for Donnette Facebook Group (link below), or send them to [email protected] In this way we can all share the ways our lives were impacted by Donnette and rejoice together that we were blessed to feel her love and light. These stories, thoughts, and images will be compiled into a book for Noah and the family. Also, in lieu of flowers, please consider contributing in honor of Donnette to the American Stroke Association, which was an organization she valued. The American Stroke Association https://www2.heart.org/site/SPageNavigator/donatenow_stroke.html?s_src=20U2W1UEMG&s_subsrc=stroke_top_nav_button

The family of Donnette Heath Gaicochea created this Life Tributes page to make it easy to share your memories.