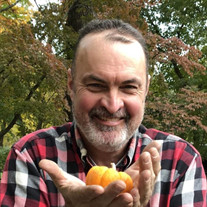 Daniel Joseph Pfeiffer of Sleepy Hollow, NY passed away peacefully on his father’s birthday, July 31, 2020 after an inspiring 3 year + battle with brain cancer. Dan was the brightest of lights and brought to the world so much of what we all wish we could bring to others. His natural, no airs way put people at ease. His eyes sparkled with a mischief that brought laughter and joy and goofiness wherever he went; he was so full of life, full of color. His stunning work ethic was to be admired & oh so difficult to compete with. He was the strongest of souls. Dan was an avid goat and bee keeper who was known as the “Goat Man”, often seen walking about his tiny, dear community, with his goats Clementine and Clyde following close behind. Dan made people smile in life, and he will continue to do so whenever we think of him. Dan was born in St. Francis Hospital, Olean, NY and graduated from Cassadaga Valley High School in 1978. In his younger years he lived in Otis Air Force Base, MA; McGuire AF Base NJ; Niagara Falls AF Base NY; Dover AF Base, DE; Ardentes, France and Okinawa, Japan where his father was stationed, as well as in Sinclairville, NY. Dan recently celebrated 25 years employed as estate caretaker for the Rockefeller family. Prior to that he was an independent contractor. Dan is survived by his loving wife, Janice (Aitchison), his mother, Barbara (his father Richard predeceased him), his brothers Timothy (Nancy), Richard Scott (Anne), Ronald (Sue), 13 dear to his heart nieces & nephews, aunts, uncles, and so many friends. In lieu of flowers, you can help support brain cancer research by sending a check to: Memorial Sloan Kettering Cancer Center Attn: Rachel Flannery Memorial Sloan Kettering Cancer Center, Office of Development PO Box 27106 New York, NY 10087 Please indicate on the check that the gift is in memory of Daniel J. Pfeiffer/brain cancer research. Donations can also be made online via a Facebook/Memorial Sloan Kettering Cancer Center fundraiser in Dan’s name.

Daniel Joseph Pfeiffer of Sleepy Hollow, NY passed away peacefully on his father&#8217;s birthday, July 31, 2020 after an inspiring 3 year + battle with brain cancer. Dan was the brightest of lights and brought to the world so much of what... View Obituary & Service Information

The family of Daniel Pfeiffer created this Life Tributes page to make it easy to share your memories.

Send flowers to the Pfeiffer family.