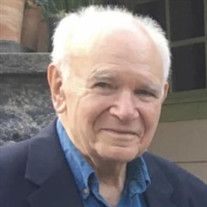 Daniel S. Ortiz, 92, of Briarcliff Manor, New York, passed away of natural causes on May 26, 2022. Dan was born on August 10, 1929, in Pittsburgh, Pennsylvania to Daniel and Pearl Ortiz. Daniel was preceded in death by his first wife Lois Ortiz, his brother Robert Ortiz, and his grandson Eric D’Ulisse. He is survived by his second wife (of over thirty years) Joan Ortiz, and his two sisters, Clara Clothiaux and Phyllis Kaufman. He is also survived by his two children, Daniel R. Ortiz and Rebecca J. D’Ulisse, his granddaughter Carolyn D’Ulisse, his three step-children, Terry, Chris, and Stuart Chandler, and all their spouses and children. He was loved by many more family members as well. Dan graduated as valedictorian at Carrick High School in Pittsburgh and on hearing that he could not afford to attend college his principal snaggled a full scholarship for him to the University of Pittsburgh. He trained there as a chemical engineer and later received a graduate degree at the Illinois Institute of Technology before starting work with Stauffer Chemical Company, where he was transferred all over the country—from Seattle (his favorite place to live), to Pittsburgh, to Mobile, Alabama, to Richmond, California, to Louisville, Kentucky. While in Louisville, he studied law at night and received a J.D. from the University of Louisville. With that, he changed careers if not employers. Anxious not to lose him, his company made him a patent attorney and he moved to Yorktown Heights, New York. He remained an active patent attorney with different employers, even setting up practice himself for a time, until nearly 80. To him, age was a way to gain more experience and to live more, not a reason to slow down. Dan also had the luckiest time in the army. Serving during the Korean War, he was sent to Hawaii to complete basic training before being shipped to Korea for action. Luckily, the war ended before he finished training and he spent much of the rest of his military career enjoying the beach. After his father’s death when Dan was only six, Dan took on much responsibility for his family. His mother, after agreeing to give him up for adoption so she could better raise his two younger sisters who were in more need, ultimately had second thoughts and he worked hard to keep the family together. He cooked for his two younger sisters, something he learned from his father, a professional cook who had learned his art as a boy in Spain. He also started a promising career as a paperboy at eight, from which he earned more money for the family than his mother was able to working at a Pittsburgh department store. He continued supporting the family while in college by working the night shift at one of Pittsburgh’s finest steel mills. Admittedly he was less successful in some of his other professional endeavors. Although he failed his tryout to become a starting pitcher for the Pittsburgh Pirates, he remained a fan and would religiously follow them, the Steelers, and his other favorite teams. But all was not struggle. Dan loved to tease his sisters and play practical jokes. Hating to clean the house, one of his assigned family responsibilities, he pulled a Tom Sawyer and convinced his younger sisters to do it for him because it was so much fun. He teased them too. When his sister, Phyllis, thinking her name did not adequately express her character, tried to convince everyone she was actually “Suzette,” Dan shameless made a point of calling her “Phyllis” in front of his and her friends. With a friend, he built ski jumps on the backs of tombstones in a local graveyard when it snowed and would leave small purses on the sidewalks with strings attached so that he could jerk them suddenly away when people stooped to pick them up. Dan had a great and long run. He was fortunate in many ways, understood that, and shared his joy of life with all those he knew. And although his dad jokes provoked groans and rolled eyes, his family and friends happily endured them. So much was he loved, in fact, that his family and many friends always claimed to appreciate the fruitcakes he would personally bake and send them every Christmas. Until his nineties, Dan was eager to discover new experiences and travel. He enjoyed seeing new places, like South Africa, Egypt, and Antarctica, and every year he tried hard to travel to Canada with Joan and friends to see classical theater and musicals. In his late-80s, to everyone’s surprise, he became a fan of Lady Gaga (even if he knew her only as Tony Bennett’s sidekick). To quote one of his own favorite phrases, the family is sure that he is now just fine—in fact, “fine as frog hair and twice as curly.” Dan’s life will be celebrated at a memorial mass at The Upper Church of St. John and St. Mary at 30 Poillon Drive in Chappaqua, NY on Friday, June 10, at 10 a.m. In lieu of flowers, the family requests that memorial contributions be made either to the Mack Chemical and Petroleum Memorial Scholarship at Pitt University, which Dan set up to honor his mother, or to Pitt generally. Instructions for making memorial contributions can be found online at www.giveto.pitt.edu and can be made there. However made, if you’d like to contribute to the Mack Scholarship, please indicate that the contribution is intended for that purpose and is in memory of Daniel Ortiz and include the code “PORTZ” in the box for “additional gift instructions.”

Daniel S. Ortiz, 92, of Briarcliff Manor, New York, passed away of natural causes on May 26, 2022. Dan was born on August 10, 1929, in Pittsburgh, Pennsylvania to Daniel and Pearl Ortiz. Daniel was preceded in death by his first wife Lois Ortiz,... View Obituary & Service Information

The family of Daniel S Ortiz created this Life Tributes page to make it easy to share your memories.

Send flowers to the Ortiz family.