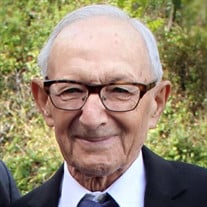 Loving husband and father, Camilo Barreiro, passed peacefully on Monday 8-2-21 in Longmont, CO surrounded by his sister and children. He was almost 91 years old. Camilo was born in the small fishing village of Tavilo, Outes in the province of Galicia, Spain on September 6, 1930, to Amadora Moledo Del Rio Barreiro and Jose Barreiro. He spent his youth learning fishing and boating with his grandfather Domingos Barreiro. At the age of 18 his mother, his sister Maria Barreiro Del Rio, and he immigrated to Irvington, New York to be reunited with their father after a 12 yr. separation due to the Spanish civil war. He later received his citizenship and was a proud American all the rest of his life. He learned landscaping at his first job as a greenskeeper at Elmwood Country Club in NY. Later he learned printing when he joined his father who worked at Bert Manufacturing Company in Irvington, NY operating the presses. At that time, he met the love of his life, Alice Valcarce. They married in 1954 and had their children Bernard in 1955 and Gila in 1956. They settled in Greenburg, NY in a home that he built himself with his father and father-in-law. He gave back to the community as a Scoutmaster with the Boy Scouts of America. He was a lover of nature and a protector of the environment. Eventually Camilo purchased Bert Manufacturing Company and operated it as Westchester Album Company until he sold it to Plymouth Inc who hired him to supervise their printing division. During his career with Plymouth he relocated to Cherry Hill, NJ and then later to Blacksburg, VA. Upon retirement he moved to Lewes, DE and built a home on Love Creek to fulfill his dream of living by the water again as he did in childhood. He spent his hours carefully sculpting his property and cultivated a beautifully landscaped setting with 2 amazing koi ponds. He and his wife lived there happily until her passing in 2014 after almost 60 years of marriage. Several years later he moved to Longmont, CO to be with his daughter Gila and son-in-law He is survived by his 2 children, Bernard Barreiro and wife Sharon, and Gila Hodge and husband Thomas. Camilo has 5 grandchildren: Stephanie Barreiro O’Connor (Christopher O’Connor), Brooke Barreiro Chapman (Kellen Chapman), Jacqueline Barreiro, Jesse Hodge (Jessica Hodge), and Rachel Hodge. He has 4 greatgrandchildren: Dillinger Barreiro Chapman, Audreyna Brookellen Chapman, Carleigh Faith O’Connor, and Alanna Shea O’Connor. Camilo spent his last years traveling, spending time with his beloved dog Pekoe, making many new friends, and working on his numerous art projects. A Visitation for family and friends will be held on Monday from 4pm-8pm at Dwyer & Michael's Funeral Home 90 N. Broadway Tarrytown N.Y. 10591. A Mass of Christian Burial will be celebrated on Tuesday at St. Teresa of Avila R.C. Church at 10am. Entombment will follow at Sleepy Hollow Cemetery. In lieu of flowers, if you wish to donate to one of Camilo's favorite charities, please contact one of the two below. The Alzheimer's Association https://www.alz.org/?form=FUNHBCBFFDV The Humane Society of America https://secured.humanesociety.org/page/83122/donate

Loving husband and father, Camilo Barreiro, passed peacefully on Monday 8-2-21 in Longmont, CO surrounded by his sister and children. He was almost 91 years old. Camilo was born in the small fishing village of Tavilo, Outes in the province... View Obituary & Service Information

The family of Camilo Barreiro created this Life Tributes page to make it easy to share your memories.

Send flowers to the Barreiro family.