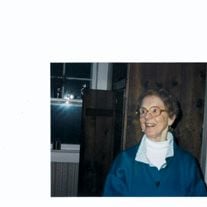 Barbara J. Glover, 1915 – 2015.             Barbara J. Glover, formerly of Ossining, NY, and at the time of her death a resident of Tarrytown, NY, died on March 20, 2015, at the age of 99, at the Calvary Hospital in The Bronx.  Barbara was born on November 16, 1915, in Vineland, NJ, and resided there for much of her life.  After retiring in the 1980's she moved to Ossining to be near her daughter’s family. For the 10 years prior to her death she resided with them in Tarrytown.             Born Barbara Gerow Jones, she was the granddaughter of one of Vineland, NJ's, founding families, and daughter of Edgar Roger Jones, Sr., and Helena Gerow Jones. She graduated from Vineland High School in 1931 and completed one year at Mary Washington College. She married William Stewart Glover in 1938. He was a vice president at Wheaton Glass in Millville, NJ, and then President of Metaglass in Vineland before his death in 1964. During her years in Vineland, Barbara was employed at the Vineland Training School, and Tradesmen’s and Citizens banks.  For many years, she served as advisor to the Vineland Junior Women’s Club, which honored her with a “This is Your Life” ceremony in 1969. She also was secretary of the board of trustees at the First Presbyterian Church for many years.             Barbara is survived by three children, Gwenn E. Glover (David Huber) of Tarrytown, William S. Glover Jr. (Karen) of Colorado, and Beth Glover Reed of Michigan: four grandchildren, Todd William Glover and Jill Glover Adams (David) of Colorado, Daniel Walton Reed (Afia Asamoah) of California, and Nathanial Gerow Huber of Massachusetts, and four great grandchildren, Madison, Paige, and Carson Adams, and Robeson Kofi Reed.  Barbara was predeceased by her husband, William S. Glover, Sr., her parents, and her brother, E. Roger Jones, Jr.             A private service and burial will be in Vineland, NJ, at Siloam Cemetery.             Memorial contributions may be made in her honor to Memorial Sloan Kettering Cancer Center.

The family of Barbara Jones Glover created this Life Tributes page to make it easy to share your memories.

Send flowers to the Glover family.