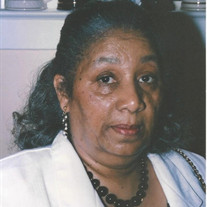 Barbara Ann Burnette, (80), a life long resident of Tarrytown, NY departed this life on July 16, 2015 at Hudson Valley Hospital, in Cortlandt, NY after enduring a long illness.Barbara was born and raised in Durham, North Carolina. She attended North Carolina Central University where she obtained a Bachelor's Degree in English with high honors.She later moved to Tarrytown, NY and married William N. Burnette. Their union lasted more than 56 years until her passing.  She worked as an educator for the Irvington House and Abbott School, in Irvington, NY until she retired in 1994.She was a dedicated member of the United Methodist Church of the Tarrytowns throughout her lifetime. She had an exceptionally kind, loving and generous spirit with all whom she encountered. Barbara leaves to cherish her memory and mourn her loss, her beloved husband, William N. Burnette; two sons, Philip D. of (Ossining, NY), Brian Keith of (Tarrytown, NY) and a host of grandchildren, nieces, nephews friends and relatives. A viewing will be held at Dwyer & Vanderbilt Funeral Home. 90 North Broadway, Tarrytown, NY 10591 on Thursday, July 23rd from 2-4pm and from 6-8pm. Funeral services will be held on Friday, July 24th at 11:00am at the First Baptist Church 56 South Broadway, Tarrytown, NY 10591 In lieu of flowers donations may be made to: Doctor’s without Borders, or the Salvation Army.

The family of Barbara Ann Burnette created this Life Tributes page to make it easy to share your memories.

Send flowers to the Burnette family.