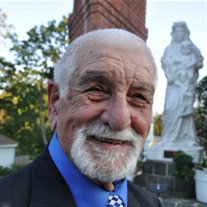 Baltasar Parra, Tarrytown, New York Born: January 18, 1930   Died: April 25, 2018 Place of Birth: Overa, Spain Baltasar is predeceased by his wife of 63 years, Josephine Torres Parra, and his parents, Petronilla Parra Morata and Baltasar Parra Parra. He is survived by his three adult children, Carol (Jim) Vincent of Hampstead, North Carolina; Richard Parra of Tarrytown, New York; and Barbara (Paul) Weinberg of Powell, Ohio, and two brothers, Lorenzo (Barb) Morata of Coto de Calle, California, and Rodrigo Morata of Staten Island, New York. He is also survived by seven grandchildren, who affectionately called him Bobo and Pipa: Erica (Mike) Ferguson, Justin (Haney) Vincent, Nicole (Bobby) Lester, Ricky Parra, Stephanie Parra, Brian Vincent, and Rebecca Parra. And there are six great-grandchildren: Logan Lester, Reese Ferguson, Lorelai Lester, Marshall Ferguson, Lane Lester, and Aiden Vincent. Baltasar was also known as Bart and Barney in the community he served in for more than forty-three years. He proudly wore the uniform of the Town of Mt. Pleasant Police Department from 1957–1959, and then he transferred to the Tarrytown Police Department, where he worked until his retirement in April 2000 as a lieutenant. He was called upon quite frequently by police departments around the county to provide Spanish-to-English translation services, which he did with great honor. Baltasar was one of the first Spanish-American police officers to be hired in Westchester County. He also served in the US Army National Guard. He is a graduate of the Tarrytown Public Schools, where he earned his high school diploma with national honors. His children often heard him say, “Not bad for a kid who came from Spain at the age of ten and did not know a word of English.” But he was most proud of his selection and completion of the FBI Academy’s 96th session, Quantico, Virginia, in 1974. This was one of the highlights of his career. Baltasar loved to spend time in his hometown of Overa, Spain, with his wife, Josephine. Traveling there often and taking his children and grandchildren, he shared his love of his heritage and culture proudly. He was an avid gardener and handyman and loved to fix things . . . but his way. Services will be held on Sunday, April 29, 2018, from 2:00–7:00 p.m. at Dwyer & Vanderbilt Funeral Home, 90 North Broadway, Tarrytown, New York. Church services will be held on Monday, April 30, 2018, at 10:30 a.m., Transfiguration Church, 268 South Broadway, Tarrytown, New York. Internment at Sleepy Hollow Cemetery will follow the church services. In lieu of flowers, the family has asked that you remember Baltasar with a donation, in his honor, to charities he has supported over the years: St. Jude’s Children’s Research Hospital at stjude.org American Cancer Society at cancer.org   The Alzheimer’s Foundation of America at alzfdn.org The Tarrytown Beautification Foundation located at 56 Neperan Road, Tarrytown, New York 10591

The family of Baltasar Parra created this Life Tributes page to make it easy to share your memories.

Send flowers to the Parra family.